Websites do not have full control over cookies that may set by various third-party scripts. To see detailed information about and to manage cookies in your browser, please check its privacy settings.

These tools are used to collect statistics about user behaviour that helps us to improve our website and services. No personal data are collected. 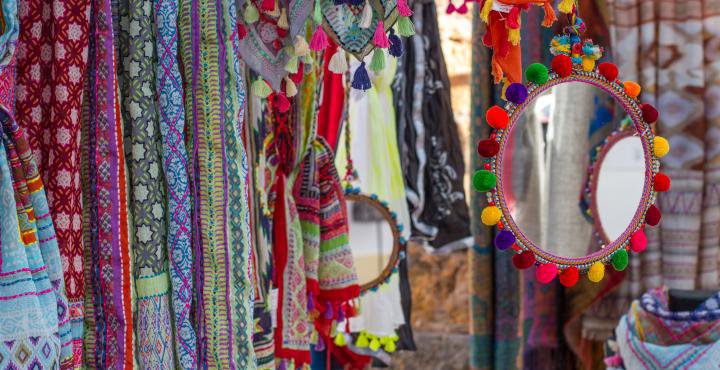 Routes around Mallorca from Palma to Ibiza by Luca Monzani

Cast off before noon, from Palma, heading to Punta Figuera’s lighthouse, then plunge into Mallorca’s channel, going southwest with the surface of the sea flashing on the bow until you make out the island of Ibiza.

Near the coast, going westwards from the eastern part of the island of Ibiza, dodging the whims of the sheltered part of the island in front of Punta Moscarter, dominated by a colossal white lighthouse with black helical fringes, the highest of the Balearic Islands which indicates the point where the northern coast starts: wild, rural, rocky, full of pine trees, some of which unfortunately isolated by the indolent flames of past fires, but recovering little by little. Smelling rosemary and sailing between crags and cliffs, anchor before the sunset in Cala Blanca, also known as Es Canaret, one of the jewels of the north of the island. Clear waters with great biodiversity and complete tranquility are its most noticeable features.

Weigh anchor after breakfast to go over the coast, little by little throughout the day, discovering lonely spots such as the tiny cove of Es Portixol, an authentic Mediterranean dream surrounded by little fisher’s houses (be careful with the depth of the water, anchoring is only suitable for small boats) or the immensity of the cliffs of Cala Aubarca, one of the most isolated and deserted places of Ibiza.

Sunset facing Es Vedrà, anchored in clear waters and the white sand of Cala d’Hort. Dinner at Es Bolardo restaurant, a tower that controls from above the whole bay in front of the mythical islet. Very recommendable. If the moon is visible, the phantasmagorical view of this place will evoke intangible and timeless dreams, veiled in a mysticism that will no doubt enrich the excitement of the trip, as long as you sail southwards at daybreak, leaving Cap Jueu, turning to starboard and letting yourself get carried away by the romanticism of other ages, letting your imagination run free in front of what the natives of Ibiza call Atlantis. A place where magic and beauty match to create a unique and oneiric landscape…the strange rock formations, changed by the hand of man who took from here the marés sandstone that build the walls of Dalt Vila, which makes this quarry (its original name was Sa Pedrera de Cala D’Hort), a very attractive place for all sorts of adventurous people. Casting anchor in the blue sea and setting it on the sand seven or eight meters deep to disembark and find the Buddha allegedly painted by a Japanese soldier who lived three years until he disappeared in this place, on an enormous rock, is an experience that gathers people, especially young and fit, in a ‘romantic and fascinating pilgrimage’. (Be careful with the hot temperatures, it is recommendable to take this trip during the twilight hours).

Heading to Formentera, twelve miles until Trocados beach and Illetas, it will offer the best version of the mythical transparencies of the Mediterranean during the day together with the most diverse and mundane nautical atmosphere. Much more quiet at night. As an alternative, sailing five miles until Cala Sahona, maybe it will offer more tranquility apart from an excellent breakfast at the restyled Hotel Cala Sahona, which is served to guests  and passers-by until eleven a. m.

One night in Ibiza is recommendable, before crossing back the Majorcan channel. Mooring for example in Ibiza Magna, mostly reasonable prices and charming staff to enjoy solid ground for some hours when you can go through the alleys of Dalt Vila and the beach bars in the port to the rhythm of the most cosmopolitan oddness, have dinner at Pastis restaurant. This will be a great chance to taste the great food variety of Armel Guillemin, a chef with a great personality, genuine without pretense.

Leaving Botafoch lighthouse, northward, the only thing left is to sail on this splendid water with countless shades of blue and white crests, a place where feelings wander in the wind, guarded by the boat, which, as an accomplice, plows through directly to the soul, the memories and the precipices of Mallorca…

We use our own and third-party cookies to improve our services, compile statistical information and analyse your browsing habits. This allows us to customise the content we offer and to display advertising related to your preferences. By clicking on UNDERSTANDING YOU ACCEPT ITS USE. You can also CONFIGURE or REJECT the installation of Cookies.